The eye is our sense organ deputy to the incident light. Through a complex mechanism, the light pulses captured by the retina are transformed into visual sensations. To understand exactly what happens we must make a distinction between sight and vision. To view, this means that the eye is able to distinguish, that is to see in terms of optical resolution. The vision is instead something more complex, it is, in fact: learning, education, culture and development. It 'a process of interpretation of the brain images provided by the eyes.
Physically, the eye acts like a camera, and as such is subject to the same laws of optical physics. In fact, a normal eye (emmetropic), ie, without defects of view, when looking at a distant object focuses the image precisely on the retina.
When we look at a near object, to see clear, the eye must change its dioptric power increasing it; must accommodate, in practice, change in shape increase, re-inflating, the lens of the eye the lens.
The images provided by the individual eyes, they should procure a double vision (diplopia). This does not happen, because the two images are fused together by the brain into a single image (single binocular vision). This mechanism, called stereopsis, allows us to obtain the perception of three-dimensionality. 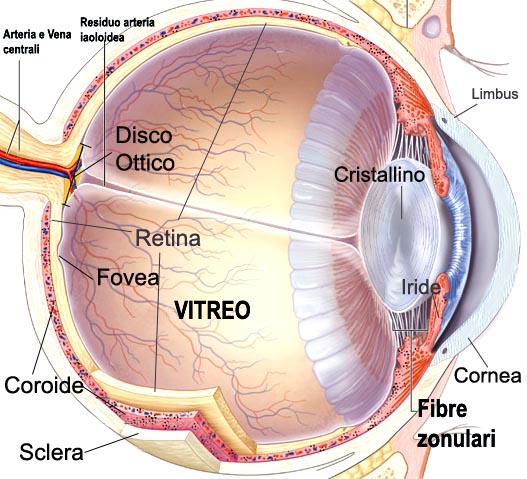 Anatomy of the eye
It all started with a light-sensitive cell, able to tell the difference between light and dark. The adventure in the universe of the evolution of the eye normally starts around 800 million years ago. From this cell would have arisen in the course of more than 400 thousand generations, all visual devices currently supplied to living beings, including humans. Each animal was then developed different methods of vision, according to your needs.

Cornea
It is an anatomical structure transparent, avascular, full of nerve endings and is the main component of the optical system of the eye. Presents five layers, of which the outer one, the epithelium, is constituted by five, six layers of cells of different thickness.

Crystalline
It consists of a small membranous biconvex lens thickness of about 3.6 mm. Its function is to adjust the focal convergence when looking at objects at different distances from the eye.

Aqueous humor
It is the fluid in the anterior chamber of the eye, including the cornea, iris and lens. Its task is to keep the tension of the eye within certain values.

Iris
It is a membrane pigmented placed behind the cornea and crystalline lens before, has a central hole (pupil). Its function is to regulate the amount of light entering the eye.

Vascular tunic or uvea
The uvea is the vascular structure in a membrane formed by the choroid, the ciliary body and iris.

Vitreous body
Between the retina and the lens, is composed of a transparent gelatinous substance and has the function of maintaining the retinal pigmented epithelium adherent.

Retina
Sensitive membrane, divided into three portions: the pigmented layer, the vascular layer, the layer formed by the nerve fibers and the photoreceptors (6 million cones and 120 rods). When the focused image of the object seen falling on the retina, events occur in physical, chemical and electrical, and through the optic nerve, the information reaches the visual cortex where it is corrected and processed.